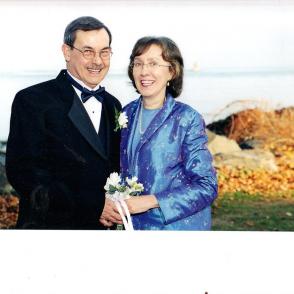 Our Dad, Chip Hennequin, was diagnosed with Parkinson's disease nearly a decade ago. The journey for him was difficult and heart breaking, and ended on July 2, 2022 when he passed away of complications from his Parkinson's disease.

Over the years since his diagnosis, we watched as his quality of life deteriorated and he lost all his independence. At first he shook a lot and had tremors. And then he started to fall as his legs got weak and failed him. We lost count of how many times he fell, and how many times he made trips to the ER. And then his speech started to go. Our Dad LOVED to talk and losing his ability to communicate was so difficult and heartbreaking to watch. And then the swallowing. Slowly he had to give up certain foods that he loved because the choking hazard was so high. And he lost some of his independence as he had to have family members cut up his food for him.

Eventually he couldn't' live on his own and he had to go into senior living, and eventually assisted living. Slowly he started to use a walker. And then a wheelchair. And he had to stop driving. All his independence was gone.

As he entered his last few weeks/months, dementia set in. Blessedly he recognized us all up until the end. But there is no dignity in dying from Parkinson's complications. And no dignity in watching your ability to live erode month by month, year by year once you get that fateful Parkinson's diagnosis. It is for this reason that our family is channeling our sadness and grief into raising awareness of Parkinson's and setting up this tribute to Dad. A few years ago Dad did a Facebook birthday fundraiser for Parkinson's and this organization, and we know he would approve of this.

We can never bring Dad back, or keep the impacts of Parkinson's from robbing him of the quality of life of the past few years. But we can raise money for awareness and research, and hope that other families and other vibrant people like our Dad won't succumb to the insidious disease of Parkinson's.