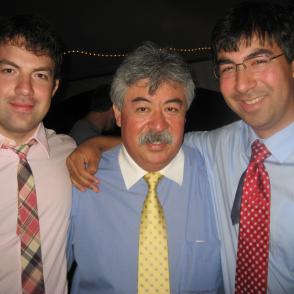 He was born in Xichu, a town in the mountains of the state of Guanajuato, Mexico, to father Luis and mother Maria. They moved to Mexico City when he was young, where his father set up a jewelry business. Apolo became an architect and got a job working for the government.

After he met my mother in Mexico City where she was a teacher, they got married and moved to Dallas. He was an architect for HDR for over 30 years.

He was a man who loved his family above everything else. He coached both of his boys’ youth soccer teams, the Braves and Tigers. He made sure he was at every game, practice, Boy Scout trip, band performance, and graduation.

He loved being outside, always finding something around the house to fix, clean or plant. His hands were always busy doing something.

He was an honorable man who believed everyone deserved to be treated with respect. From the janitor to the manager, he’d chat to everyone. He was giving with his time, always happy to teach and share knowledge, and was a perfectionist in his craft. He believed in the importance of preparation and “measuring twice, cutting once”.

He battled Parkinson’s for 10 years. Even though it had clearly effected him over that decade, he was vigorous in his treatment and exercises which helped him keep his mobility much longer than most are able to. His positivity in the face of his diagnosis was also always steadfast. He didn’t let himself feel sorry for himself, and he didn’t want anyone else to feel that way either.

He’s survived by his sister, Cheli, his wife Patricia, his two sons David and Daniel, and his two grandsons Kevin and Henry.