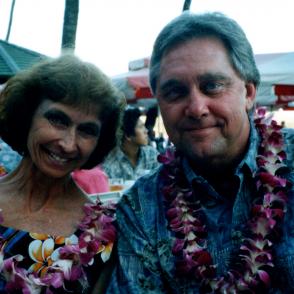 Mrs. Brooks became a Seaford teacher while her own two children were students there. As part of a tradition that began at Seaford in the early 1980s and continues to this day, her classroom was assigned an alliterative nickname, Brooks’ Braves, in orange block letters above her door.

During the 1985-86 school year, Mrs. Brooks directed a production of “Mary Poppins.” Behind stage, she used the reel of a fishing pole to lift a cardboard replica of Poppins (and her umbrella) off into the canvas sky.

While SCA’s advisor, Mrs. Brooks guided the student officers’ initiatives to run weekly council meetings, plan dances and skating parties, and attend an SCA camp in the summer and state convention in the spring.

Mrs. Brooks loved her students. She was diagnosed with Parkinson’s Disease around the same time she began teaching at Seaford, but kept her battle with its debilitating effects a secret until 1997. Although many told her that they already knew, she responded that she had been silent because she did not want to be held to a lower standard or treated as disabled. She continued teaching until Parkinson’s made it impossible for her to do so, and retired in Fall 2000. A year and a half later, one of Mrs. Brooks’ first students from 1985-86 filled her classroom slot; she teaches the third grade at Seaford to this day.

In retirement, Mrs. Brooks delighted in a monthly lunch gathering with other retired teachers, in reading novels, playing bridge, and in watching the birds and squirrels in her backyard.

Mrs. Brooks was a native of Charlotte and earned her teaching degree from Greensboro College, in 1967. Prior to coming to Seaford Elementary, she taught in various elementary schools in Virginia and North Carolina. She is survived by her husband, Thomas Brooks; her two children, Jennifer Brooks of Seaford and David Brooks of Arlington; a brother, Bruce Harris of Florence, and her father, Carl Harris, of Charlotte, Mrs. Brooks is pre-deceased by her mother, Sarah R. Harris.