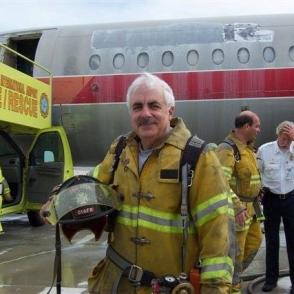 Armen DerHohannesian passed away with his children by his side July 30, 2016 at the age of 78 after living with Parkinson's disease for many years.

There will be an informal memorial in celebration of Armen's life Saturday September 24 at Hampton Beach. Armen spent many years living in Hampton and loved taking long walks on the beach. His favorite Armenian foods will be served.

Armen amassed an amazing list of achievements in his life, but he is best known for his gentlemanly manner, his amazing memory, quick wit and genuine heart. He was born on April 9, 1938 in Newton, MA. Armen earned his BS from the Rhode Island School of Design and his MS from the University of California at Berkley. His career took him around the world many times, spending two years living in Copenhagen, where, as a young architect, he joined the team in the 1960's that designed a renovation to the world famous Tivoli Gardens.

Armen began his career in aviation in 1968 when he served as an airport operator. He served as the Chief of Aviation Planning for the Massachusetts Port Authority, owner and operator of Boston Logan International Airport and Hanscom Airfield. During his tenure at Massport, he was involved in three air carrier accidents, two of which involved fatalities, working as a liaison during the NTSB investigations.

Upon departing from Massport, Armen served as Principal and Corporate VP for a private consulting firm, serving as Project Manager or Project Director for over 80 comprehensive airport and terminal master plans (including airport conceptual planning), system plans, environmental assessments and terminal plans

Armen was a world renowned consultant to airports, but had a particular passion for aircraft rescue and firefighting (ARFF). Mr. DerHohannesian formed Armen DerHohannesian Associates, LLC (ADA) in 1989 providing consulting services to airport operators involving aircraft rescue and fire fighting (ARFF) programs and development. In nearly 50 years in the aviation business, Armen provided expert ARFF planning, ARFF station siting and design services to 35 separate airports. As a nationally recognized expert in airports, ARFF, aviation water rescue and emergency response, he served in a number of leadership positions in many of the industry's most respected organizations.

Armen was a sought after speaker for aviation venues across North America and around the world, including Copenhagen, Honolulu, Sydney, Cairo, Riga, Vancouver and Majuro.

A well rounded man, he was an avid New England sports fan and a fan of the arts (performing and visual). Armen most valued spending time with his colleagues, his loving friends and especially his family. No conversation with Armen ever began or ended without a demonstration of his love and pride for his son Alex, his daughter Rebecca, and his amazing grandson, Jack.

Every person and family touched by Parkinson's disease knows that a cure must be found. Please help support a cure by donating to the foundation in Armen's memory.