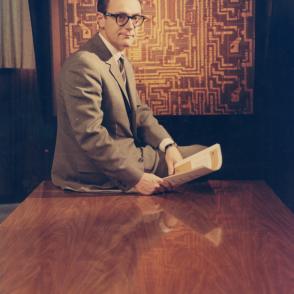 Robert Royce Johnson, Bob, departed this life at the age of 87 on Good Friday, March 25, 2016 from the effects of Parkinson's Disease. He was an idea man, a visionary, a man of action, and a person of remarkable intellectual gifts. A computer hardware pioneer from the 1950s, Bob's insights and creativity are with us today in the history of computers. Bob was Professor Emeritus of Computer Science at the University of Utah and had been a member of and Service Award recipient from the Engineering Society of Detroit. Among many inventions, he invented the magnetic ink printing technology used on virtually every check we write.

Born in Madison, Wisconsin, Bob was the son of University of Wisconsin professor of Electrical Engineering, Royce E Johnson and Olga Wellberg, instructor of Interior Design. A thoughtful and enterprising boy, by the seventh grade he had rejected prior career choices of being a garbage man or a sailor on a Great Lakes ore boat and decided to become an electrical engineer. He entered the University of Wisconsin in 1946 when the crush of returning GIs made engineering classes highly competitive. Bob responded to the pressure by earning election to Tau Beta Pi, Eta Kappa Nu, Gamma Alpha, and Sigma Xi. He also was the editor of the Engineering College magazine, which he pretty much wrote and edited by himself, while maintaining his grades, and playing French horn in the UW marching band. At a summer session in1949 Bob met Mary Perrine who was to become his wife.

Bob attended Yale University in 1950 on the AIEE Charles Fortescue Fellowship, earning a Master's Degree in servomechanisms. In 1951 he was awarded a Hughes Fellowship to attend Caltech with the added benefit of employment at Hughes Aircraft. He joined the Hughes Digital Computer group which set the direction for his future career. His supervisors at Hughes had been managers of programs at Los Alamos and it was from them that Bob learned to understand the possibilities of digital computers. He designed and built the first guidance computer for an aircraft and later designed the radar-seeking guidance computer for the Falcon missile. At Caltech, his PhD dissertation project was to design, build and successfully test a polynomial root extractor digital computer. By the time he left Hughes he had developed computer inventions leading to his first 15 patents. The most notable was his 1953 "Johnson Counter", which is still a basic counter used in logic design. It is also worth noting that his 1956 PhD from Caltech was the first granted by that illustrious institution in Digital Computing.

Following Caltech, Bob chose to get experience in a "big company" and joined General Electric's research lab in Syracuse, His first major assignment was to direct the technical development of the GE- Bank of America's ERMA system, the first computerized bank check handling and demand deposit accounting system. The GE ERMA system's magnetic ink character font used on bank checks today is the oldest continuous standard in the computer industry.

In 1987 Bob joined the faculty of the University of Utah as Chairman of the Computer Science Department, where he served until his retirement as Emeritus Professor in 1993. Following retirement, he joined Filoli Information Systems of Palo Alto CA, then SI Diamond of Austin TX, and in 1996 established nDV LLC, specializing in visualization of multidimensional spaces. Throughout his life Bob was an idea man, a visionary, a man of action, and a person of remarkable intellectual gifts. A computer hardware pioneer, Bob's insights and creativity are with us today in the history of computing.

Throughout the years, Bob maintained a great love for camping, skiing, hiking, sailing, travel, and growing heritage apples - all of which he happily shared with his family, and they with him. He became an expert at grafting trees for his own small orchards as well as for others. He regularly attended Utah Symphony concerts and Utah Opera performances as well as Salt Lake Chamber Music concerts. He delighted in seeing his children and grandchildren become desert campers, ski instructors, Teton hikers, bioengineers, gardeners, musicians, artists, actors, healthcare professionals, sailors and world travelers..