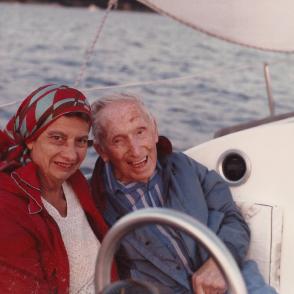 This page is in tribute to my father, Otto, who suffered from Parkinson's for more than 26 years, until his death in 1989, and to my mother, Hilde, who was as dedicated a care giver to my father, as anyone could have wished for. I am dedicating this page, and the annual fund raising event (The Park to the Nott Ride to Fight Parkinson's), to them, not only because my father's life was, at the very least, interesting, but more importantly, for what it has taught me about humility, perseverance and the human spirit.
Otto was born in Freiburg, Germany, in 1907. He followed in his father's footsteps and graduated from the law school in Heidelberg in early 1933. After only a couple of months, on June 15, 1933, he was stripped of his law degree under the Nazi's Law for the Restoration of the Professional Civil Service, a law which forced Jews out of the judicial system. He and one of his two brothers fled to the Alsace Lorraine region of France. In January , 1940, he joined the French Foreign Legion, probably in anticipation of Germany's imminent invasion of France . He served in Morocco and was honorably discharged in October, 1940. He made his way to Nice, France, where he stayed until July, 1941. In August of that year, he managed to get to Spain, where he boarded a cargo ship (the SS Navemar), crammed in the cargo holds with more than 2000 other refugees, for his escape from Europe, and reunification with his two brothers who were already in the US. (That seven week voyage across the Atlantic is documented in Wikipedia under "SS Navemar" and in the US Holocaust Museum.) He entered the US through Ellis Island and took up residence in his brother, Rudy's apartment in NYC. Otto was now 34 years old, in a new land, knowing only a few words of English. His true passion was engineering, and starting life anew, he managed to earn a BS degree in mechanical engineering from NYU and then, a PhD. He did this while working for defense firms that worked on airplane instrumentation for the war effort, even though he was labeled as an "enemy alien" by the government. From the 50's until 1970, he worked his way up the ladder at Sperry Rand Corp. in Lake Success, becoming Chief Engineer in their sonar division. He did not retire voluntarily. The debilitating effects of Parkinson's Disease made it impossible for him to draw or write, or to communicate clearly with others.
So where do I come into this story? In 1963, Otto and Hilde, both German refugees, heard about a 9 year old boy in an orphanage in Uruguay, born of German and Austrian parents, both of whom had passed away. Otto had already been diagnosed with Parkinson's, and in spite of knowing what was ahead of him as a consequence of the disease, they brought me to NY, and proceeded to adopt me. Although I did not always show my appreciation for the love, care and tutelage, no less the opportunities (including attending Union College -Class of '75), which they provided to me, I later came to realize what wonderful, caring and self sacrificing people they were. From the day I arrived at Idlewild Airport (JFK), my father couldn't play with me or join in gatherings with other children the way other kid's fathers could. The Parkinson's progressed rapidly from tremors and stiffness, to loss of balance, to perverse facial expressions due to the cocktails of experimental drugs that he was prescribed, and then finally to confinement to a wheelchair. Parkinson's is a disease that robs one of life from the outside in. Until the later stages of the disease, my father could still express his sense of humor and his appreciation for all of the day to day things that we generally take for granted. It was not until many years after his death in 1989 that I learned about his life prior to my arrival in NY. How could someone who was stripped of his profession only because he was Jewish, then had to flee his home, leaving his parents behind, never to see them again, then only to be afflicted with Parkinson's, not be bitter? How is it that this man did not complain a day in his life for what he had to go through? None of it of his own doing? How is it that the paramount thought for him was that he didn't want to be a burden to his family? I wish I had the answer, but I don't! He was a far better man than I - and he was, and will always be, my mentor, my flashlight in the dark. So it is for him, and my mom, Hilde (that's a whole other story), who cared for him for all those years, without objection, hesitation or question, that I organize The Park to the Nott Ride to Fight Parkinson's, which has become an annual event. Whether it is by joining our bike ride, donating or getting others to donate, please help us with the fine research which is undertaken by the Michael J. Fox Foundation to find treatments and a cure for Parkinson's Disease.