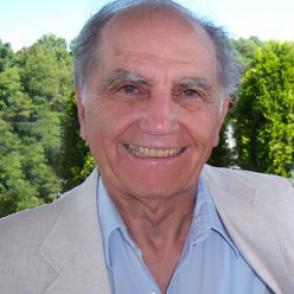 Nicholas Perrone passed peacefully at home on Jan 1, 2021 surrounded by family. He was born on April 30, 1930 in Brooklyn, NY to Louis and Mildred Perrone, as the middle of 3 sons. We will miss him greatly, but feel very fortunate to have shared his long and happy life..

He excelled in math at school which ultimately led to a PhD in Aeronautical Engineering from the Polytechnic Institute of Brooklyn.

In 1955 Nick attended a fortuitous church dance where he met the lovely Serafina Cagliostro. They married in 1957, had 2 daughters and moved to Maryland in 1962 for Nick to start a career at the Office of Naval Research in Washington DC. Soon after, he began a 26-year tenure as an adjunct professor of Mechanical Engineering at Catholic University. To make life interesting, Nick and Sarah added three additional daughters to their family, creating a chaotic but joyful home.

Among many accomplishments, Nick designed, tested and holds a patent for an energy-absorbing ring for bridge and guard rails which are widely used today. In 1987 he founded Perrone Forensic Consulting – reconstructing and analyzing car accidents to identify the cause of injuries and potential design defects. He testified in Congress, citing the need for increased auto roof strength standards to reduce catastrophic injuries. He edited multiple books and journals and published 78 papers. Nick was extremely productive and lived by the motto, "leave the world a better place".

In 1997 Nick and Sarah moved to Newtown Square PA to be closer to many of their daughters who had settled in the Philadelphia area. Over the years, they traveled extensively. They celebrated their 50th anniversary in 2007 with a mass at St. Anastasia and a memorable vacation with children and grandchildren in the Outer Banks of North Carolina.

Nick was a devoted husband and father and instilled the importance of education in his daughters. He played guitar for many years and enjoyed singing and harmonizing with his beloved Brooklyn boyhood friends: Vince, Mickey, Anthony, Joe Fig, Joe Prince, and Guido. Nick was an avid tennis player and enjoyed playing doubles with his buddies until last year. He was also an active investor - always looking for the next great stock. He encouraged his grandchildren to invest and provided his tips in a family newsletter called “Poppy Seeds”.

Nick closely followed politics and was concerned and frustrated by disparities between the “haves” and “have-nots”. He also liked puns and maintained his sense of humor even in his last days. He enjoyed sharing meals with his family, making pizza, and poppy eggs. No meal would be complete without his fresh-cut fruit followed by his signature butter pecan ice cream with sprinkles and whipped cream.  We request that you enjoy a big bowl of ice cream in his honor.

Nick was diagnosed with Parkinson’s Disease two years ago and was very focused on learning about new therapies to bring us closer to a cure. Please consider donating in Nick's name. We are very grateful that you were part of his 90+ year adventure!