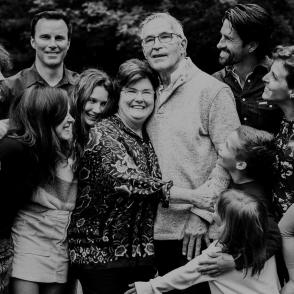 He was raised in Bryon, Illinois and grew up surrounded by friends, a large loving family, and hundreds of great memories and stories. Robert attended Byron High School and graduated in 1966 as the class valedictorian. He was a three-year starter on his high school basketball team and also lettered in track and cross country. His 1966 half mile record time stood as the school record for nearly 50 years. He was inducted into the Byron High School Hall of Fame in 2015.

Robert met his future wife Cheryl at Bryon High School. While Cheryl attended University of Missouri, he wrote her one letter per day until he could join her at Mizzou the next year. Their favorite song was “Unchained Melody” by the Righteous Brothers. They were married in 1969 and recently celebrated their 51st anniversary.

At the age of five, he decided he wanted to become a “real people’s doctor” rather than a large animal veterinarian like his father. By age twelve, inspired by the care of Dr. Sam Behr of Rockford, he decided to focus on a career as an orthopedic surgeon with a focus on sports medicine. Robert attended University of Missouri where he graduated Summa Cum Laude. While balancing a significant undergraduate course load, he was also a member of the University of Missouri track team for two years. He attended University of Iowa Medical school and completed his residency program through Northwestern University.

Robert started his practice as an orthopedic surgeon with an emphasis in Sports medicine in 1979 at Rockford Clinic. He practiced medicine for 30 years. Robert joined Rockford Orthopedic Associates in 1999, and he played a key role in growing Rockford Orthopedic Associates from a small practice into a world class medical group now known as Ortho Illinois. As a physician, he was known for his rigorous surgical methods which led to a perfect infection rate. He relished his many outstanding medical partners , physician assistants, as well as the passionate and gifted nursing staff he worked with in and out of the operating room. During his nearly 12 year retirement from full practice as a surgeon, his former colleagues organized an annual meeting called “Beers with Bob” that allowed him to stay connected with his colleagues.

Sports Medicine was the true passion of his medical career. During 30 years of sports medicine practice, he was the team doctor for Northern Illinois University, Hononegah High School, and Rockford Lutheran. He also served thousands of student athletes from the entire Rock River Valley-including multiple pro-athletes. Many athletes remember his skills as a communicator and motivator as much as his skills as surgeon. Countless athletes found their way back onto the floor, field, or track because of Robert's unique combination of medical skill and motivational techniques.

He practiced medicine in a way that was part doctor and part coach. As a result, his sports medicine practice also led him to countless friendships with coaches. He also worked to support referees with medical needs-which was likely a much needed penance for his habit of loudly critiquing their performances over 1000s of games.  As passionate as Robert was about his career, it never exclusively defined him. He was a man of many hobbies. His hobbies led to an even greater variety of life-long friendships and nicknames.

Cars were always a passion. He raced and collected classic Corvettes. He had many award-winning fully restored cars that he would trailer to car shows across the country.   As a small child, his father nicknamed him “Irv” or "ERPH” because at an early age my father liked the “ERPH” sound generated by a train’s steam engine. His love of trains continued to into adulthood where he built multiple “N Scale” layouts. It was a common for numerous visitors to come see his elaborate train layout.  Boating was also a major interest area. From the Rock River to his beloved Lake Maxinkukee and Lake Mills, he excelled as a boat driver and water skier. His desire to mix rigid boat etiquette with the fun of water sports earned him the nickname “Captain Tow.” Captain Tow often started water skiing adventures as early as 6 in morning.

Robert also loved dogs. Throughout his life he had multiple Dachshunds and Dobermans. He also enjoyed breeding and showing dogs.

Later in life he became an avid gun collector and WWII re-enactment enthusiast. He collected era specific uniforms, guns, jeeps, and medical equipment. He would often participate in re-enactment events.   Finally, basketball cemented his deep love of friends and family. He attended countless games as a physician, father, and fan. Driveway basketball was also a great source of joy. The Jarrett family driveway was home to some of the greatest 3-3 games in Rockford’s storied basketball history. Countless players and coaches bonded during warm summers over hoops, pizza, and beer. A door in the garage proudly acknowledged all participants with a well-earned signature.
Beyond his career and hobbies, Robert’s true legacy was his impact on people. His love for people transcended race or social class. Robert and Cheryl’s home on Saxon was known for its open door and stocked fridge. Robert was a man driven by his passion for family, friends, and competition. He was a second father to many and a friend to many more. A conversation with Robert was likely to include aphorisms and stories that delivered both wisdom and humor. If one could endure his remarkable intensity, the reward was a man whose generosity was truly boundless. He loved his God, wife, children, grandchildren, family, friends, medical practice, and his hobbies. He was a man who truly loved life and made the lives of others better.