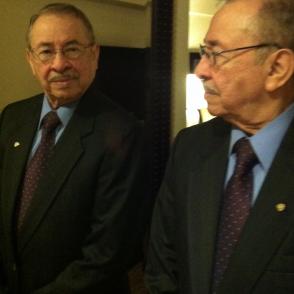 On August 5th, 2020, J Oscar Aparicio, Sr. (93) passed away peacefully with his daughter by his side in Oak Park, Illinois. Beloved husband, devoted father of 6, Grandfather of 6, and Great-grandfather of 4.

Don Oscar, as he was respectfully referred to in his native country of El Salvador, was a licensed accountant and earned his MBA in the early 1970’s. He worked as a General Manager for a private enterprise for over 20 years. He was a dedicated advocate in academia as a founding member of his children's private school's Parents Association; Co-founded a private school with his brother in 1968 where he worked as General Administrator until he retired from daily operations in 2018; and Founding Member of the Universidad Pedagógica Dr. Luis Alonso Aparicio of El Salvador.

He enjoyed sports and travelled to attend numerous Olympic and World Cup events, including the 1972 Munich Olympics where he found himself trapped at his hotel during the terrorist attacks that occurred at the Olympic Campus. He enjoyed horse-back riding and was proud of his agricultural upbringing by his aunts (after losing his mother at 11 years of age) in his home town of Santa Elena.

He loved to play the guitar and to sing at social occasions accompanied harmoniously by his close friends. He was known for his generosity and hospitality to friends and family. He will be missed as loving husband, father, and grandfather by his family. His unwavering leadership and guidance will be missed by his loyal employees.

He was diagnosed with Parkinson's late in his life.